The Champs Élysées is surely the iconic avenue in Paris.  It conjures up images of a wide, tree-lined boulevard lined with magnificent Beaux-Art style buildings occupied by elegant designer boutiques, discreet luxury hotels, the famous Lido cabaret, and like a giant exclamation mark, the Arc de Triomphe marking the summit.  The reality though is that over the last few years the street was in danger of becoming just another retail strip full of banal chain stores and more than a few fast food outlets.  Two recent spectacular renovations have heralded a rejuvenation of the world’s most beautiful avenue.

The first of two important adaptive reuse projects was the new Apple store, on the corner of the Champs Élysées and rue Washington, two blocks down on the left-hand side coming from the Arc de Triomphe.  Built in 1893, it occupies a quintessential Parisian apartment building that had originally been a hotel particulier, the home of Alberto Santos Dumont, a Brazilian inventor and early aviation pioneer. In later years it had become one of those beautiful but anonymous stone buildings that one walked past without giving it much more than a quick, admiring glance.

The transformation was undertaken by Apple’s chief design officer, Jonathan Ive, in a fascinating collaboration with British architects Foster & Partners (the same firm responsible for the stunning Bloomberg headquarters in London).  Ive says that “working with an historic Parisian building was a great responsibility and a phenomenal opportunity…our first priority was to honour the history of the building, while thoughtfully updating it to create spaces both grand and intimate.  The carefully interweaving layers are warm and light-filled, celebrating the timeless spirit of the city.”

Off the street through a swirl of wrought iron doors, you come into the entrance passage flanked by display spaces.  It’s immediately apparent that the interior is unlike the usual Apple store.  Instead of the typical one vast space there’s a number of smaller scale rooms spread over four floors.

From the lobby the original inner courtyard has been transformed into a spectacular atrium, now roofed over with solar-panelled mirrored pyramids that reflect dappled sunlight.  When viewed from below, these solar panels reflect fragmented images of the neighbouring buildings.  The entire building is powered with 100% renewable energy.

In the centre of the building is an impressive, ornately carved staircase, an escalier d’honneur, that was stripped back to its original finish, with the stairs in chocolate brown marble, and the landings in striking black and white diamond tiles laid in a diamond pattern.

The original detailing and interconnecting spaces of the building have been reinstated, with later additions removed and replaced with contemporary spaces.  This interesting distinction of scale and architectural styles between original and modern allows the history of the building to be appreciated and understood. 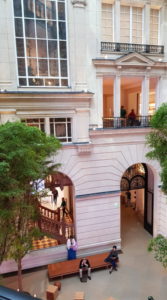 As well as a space for promoting their own products, the atrium courtyard is also being used for a series of sessions called ‘Today at Apple’.  One of the first was the launch of the Spring/Summer 2020 collection for womenswear label Coperni, which was not a live show, but instead presented on the huge video wall, to a voiceover by the designers Vaillant and Meyer talking about their designs and fabric choices to the audience, and focussing on the high-tech aspects of their new collection.  Future events are planned for live performances by musicians, presentations by artists, photography and a variety of other inspiring creators and innovators.

A few months after the Apple store opened, an exciting new branch of Galeries Lafayette opened further down at no. 60 Champs Élysées.

The new store, spanning over 6,500 sq.m., was previously the home to a huge Virgin Megastore.  Built in the 1930s the building was first occupied by the National City Bank of New York.

The interiors have been beautifully restored, with additions and alterations that respect and celebrate this gorgeous Art Deco building.  The displays are opulent and enticing, planned not to simply showcase and sell merchandise, but designed to engage with the customer and stimulate the senses—all the things that shopping online, just getting what we want by clicking onto an image, cannot offer.

The renovations involved stripping out the black-painted walls that obscured the majority of the building’s interiors, and making space for a new focal point: a light-filled central atrium anchored by a sequence of chunky marble columns.  Display plinths that wrap around the columns have been made from gold-hued sheets of perforated metal.

In some spaces merchandise  is presented inside tall stacks of hollow boxes, and mannequin stands are clad in reflective mirrors.  The store aims to provide an unrivalled fashion selection, and not only the expected international designer labels.  A section of one of the upper floors is dedicated to emerging fashion designers; another space is given over to special edition trainers, while another features jewellery.

The grand staircase in the atrium can also serve as staggered seating for in-store events such as fashion shows, and a scaled-down replica of the lower portion of the Eiffel Tower climbs to the second floor.

By way of a Vogue Paris guided tour, the ground floor will have occasional pop-up stores and a beauty products section.  The management is calling the new store a laboratoire de commerce, with the aim of changing the traditional relationship between a store and its clientele, and suppliers.  They say this is in response to new ways of consuming and working collaboratively, and to be continually open to the ideas that are transforming the retail experience.

These two significant projects signal a new vision for the Champs Élysées, and indeed Paris, in the lead up to the city hosting the Olympic Games in 2024.  These have inspired other luxury brands to move onto the avenue.  Chanel has opened a beauty boutique next-door to Galeries Lafayette, and Tiffany is just a few doors away.

The House of Christian Dior is now at the top of the avenue, near the Arc de Triomphe.  It will be there at least two years while their historic home on Avenue Montaigne undergoes a massive renovation, and—who knows?—may put down permanent roots.

New life has also come to the rond-point at the base of the Champs Élysées, at the Place de la Concorde end.  The first fountain on this historic site was installed in 1817, but was demolished in 1854 when it was deemed a disruption to traffic flow.  A number of other fountains were installed and subsequently removed over the years, mostly due to deterioration.

Engineers at Swarovski developed a crystal which would be appropriate for outdoor use, robust, resistant to shocks and capable of integrating water and light.  The colours of the crystals vary depending on the seasons and the light at any given time of day.  The fountains constantly rotate and are lit by LEDs in the evening.

All this signals a fresh spirit for the Champs Élysées.  After all, the world’s most beautiful avenue is a symbol of Paris.