ALL DRESSED UP FOR CHRISTMAS!

France is famous for its illuminations during the festive season.  Despite the huge drop in numbers of visitors, and almost in defiance of the difficulties faced by everyone during this extraordinary year, Paris in particular is dressed with its usual impressive lighting displays to celebrate the holiday season.

Along with many other cities and towns across France, Paris is all decked out in festive lighting and Christmas-themed displays, although most of the traditional outdoor Christmas markets have been cancelled.

The Deputy Mayor declared that “Of course there will be lights in Paris during the holidays, but this year, we have to reconcile with a double-imperative: offering Parisians a festive, even magical, Christmas, while complying with the health guidelines.”

Popular French singer Louane was the celebrity chosen to flick the switch to turn on the Christmas lights on the Champs-Elysees on 22 November.  This traditional event was streamed live online to persuade people to stay at home and watch it on the internet instead of flocking, in the usual way, to the avenue for the show.

The Place de la Concorde and the Obelisk have been adorned with a forest of Christmas fir trees and lots of snow, and the monument bathed in bright, fluorescent blue lighting.

The City of Paris has once again set up a Christmas village in front of the Hotel de Ville, including a small Christmas market and free entertainment that will run through to the New Year.  The façade of the beautiful Hotel de Ville is also decorated with special festive lighting.

The elegant and oh-so-chic Faubourg Saint Honoré has put its best collective designer-shod feet forward to create a special lighting display, even more spectacular than usual.  This year, a giant hot-air balloon has been set up between the Church of Notre Dame de l’Assomption and the Christian Dior boutique, near the corner of rue Cambon.

Further along rue St. Honore at the Place Vendome, the Comité Vendome has installed four 10m tall Christmas trees around the column, and 160 smaller trees placed in front of stores to illuminate the windows of the luxury shops.

Place de la Bastille is now lit up with Christmas colours.  The base of the Colonne de Juillet in the centre of the Place has been encircled with a forest of birches and green and white fir trees, while a laser light show of snowfalls is playing on the Colonne.

For many, one of the highlights of Parisian Christmas festivities is the department store decorations.  The most spectacular has to be Galeries Lafayette.  The windows always attract huge crowds, not only of eager children but adults as well.

This year, the window display consists of 11 scenes, based loosely on Saint-Exupéry’s ‘The Little Prince’, showing a little girl who travels the world to meet fantastic characters, ranging from a gigantic snow leopard, a village of polar bears, extraordinary desert flowers and Russian dolls.  She ends her world tour, returning to Paris bearing a huge haul of exotic gifts.

Inside the store, the traditional massive Christmas tree that reaches right to the top of the glass dome always elicits gasps of awe and delight, even from those used to seeing each year’s spectacular decorations—and this year is no exception!  Visitors can get up close to the tree by venturing onto the Glasswalk—a 9m long glass walkway suspended from the 3rd floor that juts out over the huge space.

As you’d expect, the other major department stores, Printemps further along Bvd Haussmann from Galeries Lafayette, and Bon Marché Rive Gauche also have beautiful festive decorations.  Printemps Christmas windows are very dreamy, with 92 characters, straight out of fairytales, including 65 that come to life in front of passersby, and of course, the obligatory gigantic tree on the ground floor inside the store.

The elegant Au Bon Marche, on the Left Bank, where the 6th arr. morphs into the 7th, has opted for a totally white theme, in keeping with the store’s crisp, white interior. Lavish, but understated.

Sadly, but not unsurprising, many of the famous Christmas markets have had to be cancelled for this year.  Some have survived though, with stringent distancing regulations, which must be very difficult to enforce, given the nature of markets.

Some cities and towns have put an extra effort into their festive street lighting.  However, the Bordeaux region has plenty of Christmas markets.

In Bordeaux, there is a huge wine-tasting event at Place de la Bourse, taking place over a couple of days, called “Bordeaux Tasting”, which is free to all.  More than a hundred wine houses from Bordeaux and other regions such as the Burgundy, Rhône, Alsace and Loire will be presenting their best wines.  The city has also decked out many of its monuments in beautiful decorations as well as many of the little streets in the ancient quarter.

Lyon has successfully held its annual Fête des Lumieres (Festival of Lights) this year, which creates a huge buzz throughout the city.  However, there doesn’t seem to have been a great deal of effort enforcing social distancing!

The light show finishes with a dazzling Light Parade, with spectacularly floats lit up with amazing effects.

Nice may be in lock-down, but the city has still decked the streets and public spaces with its usual magnificent decorations and lighting.  Images are projected onto the façades of major buildings, and public sculptures are beautifully illuminated. 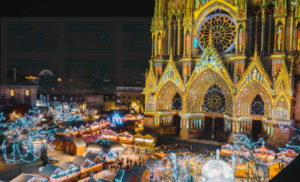 If you were in northern France, Reims would be the perfect destination to see an outstanding Christmas light show.  The city was the site of the first French Christmas celebration, when, in 496, King Clovis and 3,000 of his warriors were baptised.  Bishop Remi purposely chose the day for this ceremony.  This year, this story and other historical events that occurred in the city, is depicted in a dazzling light show on the façade of the UNESCO World Heritage listed cathedral.

The beautiful city of Strasbourg, capital of the Alsace Lorraine, has donned all its Christmas finery.  Although almost all of the Christkindelsmarik (Christmas market) have been cancelled, the streets, houses, façades of the Churches, twinkle with thousands of lights and countless decorative elements.

The star is probably the great Christmas tree, proudly standing on Place Kléber, which almost steals the show from the magnificent Notre Dame Cathedral.

It’s not just Paris and the regions that have put a huge effort into stunning festive lighting and decorations.  Many of the famous chateaux, such as Fontainebleau, Cheverny and Chambord, have really outdone themselves this year, and even if the interiors are closed for the moment, they can be enjoyed from the outside, with their amazing special effects on the façades and grounds.

One of the most spectacular is the Chateau de Vaux-le-Vicomte near Melun about 55kms S.E. from Paris, where the lighting takes the form of a video that narrates a story relating to the chateau.

This year has certainly seen much of the Christmas activities and special events cancelled, or at best, postponed.  Perhaps it’s these restrictions that have determined so many local authorities across the country to try even harder to put a bright and cheerful face on the public spaces of their communities, and so many of these are truly magical.

Hopefully, we shall be able to join in next year, without restrictions in safe environments, ready to savour all the attractions, delicious aromas, special events and sensory experiences that the season offers throughout the country.

While the museums and galleries are closed throughout the country, the cities, towns and monuments have done their best to become works of art in their own right.