Provins, a town famous for its medieval fairs

Posted in Beyond Paris.

A little over an hour by train to the east of Paris, the medieval town of Provins, is famous for its intact fortifications, impressive monuments and architectural character, combined with a network of small canals.  It became a major venue for the great trading fairs that linked northern Europe with the Mediterranean basin, and was fortified in the Middle Ages by the powerful Counts of Champagne.

The site of present-day Provins was already established as a fort by 802AD, as documented in an ordinance by Charlemagne.  Its location at the junction of two important regional routes between the medieval centres of Soissons, Troyes and Sens, gave it political and commercial power that saw the castle fortified in the 11th and 12th centuries.  The original enclosure (castrum ) was small, but the settlement grew up rapidly outside the fortifications, which in turn were encircled by a defensive wooden wall in the late 12th century.  A third set of fortifications, this time in stone, was added in the first half of the 13th century.

Provins is one of the four towns (together with Troyes, Lagny and Bar-sur-Aube) where important medieval fairs were held in the reign of the Counts of Champagne, developing here from the 11th to the 14th centuries. Provins is the only one to retain its original medieval urban fabric.

Modern Provins comprises the Upper Town, which grew up on a spur of the Brie plateau, and the Lower Town, lying further to the east at the confluence of two rivers.  The Upper Town is characterised by the small houses built from stone and timber-framed construction and by enclosed gardens.  The skyline is dominated by two large buildings: the so-called ‘Tour de César’, a stone structure, dating initially from the 12th century, consisting of three large spaces one above the other, covered with a 17th-century conical roof.  The second is the Romanesque-Gothic church of Saint-Quiriace.

Construction of the church began with a choir of impressive size in the 12th century and continued with the crossing of the nave and two bays beyond.  Work was suspended owing to the decline of Provins in 1320.  The vaults above the crossing were damaged in a fire in the 17th century and replaced with a dome.  The centre of the Upper Town remains focused around the old market square, surrounded by houses that developed in relation to the fairs, each with large vaulted underground storage spaces.

Many of the private buildings which were erected for commercial and residential purposes, all date to the 12th and 13th centuries.  A characteristic of all the ancient buildings in Provins is their system of vaulted cellars, dating from the 12th to the 14th centuries.  Visitors can take tours of several of these extraordinary underground spaces.  The streets, unusually wide for a medieval town, are testament to the enormous commercial activity generated by the medieval fairs that brought many traders to the town for weeks on end.

The 12th-century ramparts still surrounding the Upper Town on three sides have been relatively well preserved.  Unfortunately, the walls enclosing the Lower Town were dismantled in the 19th century, like so many towns and cities across Europe.  Two of the more important historic churches, Saint-Ayoul and Sainte-Croix, are located in the lower town.  They can be inspected as part of the walk from the railway station to the Upper Town, along with the network of canals that originally served the numerous woollen mills.

The oldest building in Provins is probably the 12th-century Maison Romane (now the museum), constructed in coursed dressed stone. Its location in the former Jewish quarter suggests that it may originally have been a rabbinical school or even a synagogue.

The Lower Town of Provins is testimony to the development of various handicrafts to an industrial scale. There are three areas surrounding the plateau where clay was extracted for the process of removing grease from wool. These intricate underground mine galleries were quarried at several levels and were later used for storage of wine, etc. 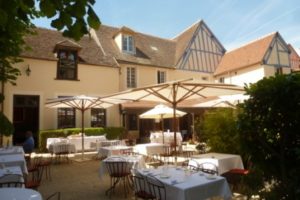 Provins is an excellent example of how the city has captured the fame of its World Heritage listing to garner support for the conservation of its many historic features.  Today, it relies on well managed tourism to sustain much of its life.  There are several excellent restaurants lining the main square, with small hotels and retail outlets fitted neatly into the historic urban fabric.  Modern tourism is simply taking Provins forward in a manner that reflects its origins as a major trading town filled with bustling crowds.

How to get there:  Your Navigo Pass will get you there by Transilien (Ile de France) trains departing hourly from Paris Gare de l’Est.  The journey takes around 1 hr 20 mins.