MAINTAINING PARIS AS A WORK OF ART 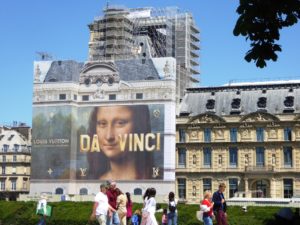 Advertisement for Louis Vuitton on the facade of the Louvre.

Paris, as a modern city with an historic heart, is above all, a work of art.  As such, it must be continually refreshed to present its wonderful collection of public monuments and private buildings in the best possible light.

This requires a major commitment of funds for conservation, funding that can be difficult to allocate or generate given the many calls on the public purse.

Several years ago, the city of Venice sparked major controversy when commercial advertising was permitted on the protective hoarding or scaffolding that is necessary for any major façade cleaning or conservation project.  Advertising on the Bridge of Sighs and Doges Palace was a brave move for public officials searching for ways to fund major conservation efforts.

Nevertheless, the work was subsequently completed, the advertising hoarding removed, and these Venetian icons are again proudly reflecting their flamboyant historical architecture.

In Paris, the city has adopted two important strategies to keep historic buildings, both large and small, looking their best.  Major public and private buildings have been permitted to include advertising on their hoardings, while the mandatory façade cleaning of private buildings is paid for by the building’s owners.

In a display of French pragmatism, a special Article of the French cultural heritage law was passed requiring all of the funds generated by such advertising to be directed to the building’s conservation works.

Reference to this law must be displayed on each particular advertisement such as on the famous art nouveau Hotel Lutetia at metro Sevres Babylone.

It was prominently displayed on the scaffolding for the recently completed Hotel de Crillon facing the Place de la Concorde.

Scaffolding on the adjacent Naval Ministry building is currently adorned with advertising, while also exhibiting the glorious interior of the building.

Temporary advertising has been enthusiastically embraced by many famous international brands, who vie for the honour of being associated with such prestige cultural icons such as the Musée d’Orsay and sections of the Louvre facing the Seine.  Both of these works have now been completed and their full glory recaptured for public appreciation and universal admiration.

This radical policy has become so successful in mobilising funds for conservation that it has been extended to monuments such as the Bastille, Gare St Lazare and the monumental Church of the Madeleine and St Eustache.

For several years, the historic column in the centre of the Place Vendôme was totally enclosed by hoarding.  This work was proudly sponsored by the adjacent Ritz Hotel, which itself was undergoing total restoration.  Informative signs and historic photos on the hoarding celebrated the contribution of the Hotel to the column’s conservation.

With the re-opening of the Ritz and the completion of the restoration of the column, the Place Vendôme has regained its fame as one of the best public spaces in a city blessed with many such squares.

We have noticed over recent years that many of the private residential buildings undergoing façade renovations are located at prime intersections, where the visual impact of their cleaning will be maximised.

It seems to take about six months to clean the façade of the typical 19th century Haussmann-style building, although advertising on their scaffolding is not such a common sight.

Although Paris has wholeheartedly embraced this policy, other European cities including Venice and Rome, have continued to capture advertising revenue to fund their major conservation projects.

Paris has embarked on this commercially-supported conservation programme that may take decades, but the ultimate result is to protect and refresh the presentation of Paris for visitors and residents alike.

So, if you are disappointed during your next visit to Paris that one of your favourite historic buildings is covered by hoarding and advertising, take heart!  When you next return, the building will be in much better condition, and once again contributing to Paris as a work of art.