We had been vaguely aware of a museum on la butte (hill) de Montmartre dedicated to the area, but somehow it had eluded us.

Not so long ago we came across an article announcing its re-opening after years of closure.  Always keen to make new discoveries in Paris, and armed with our trusty Michelin street directory, we headed off to finally track it down.

We took the metro to Lamarck (Line 12) and strolled up the steep streets until we found the Musée de Montmartre at No.12 rue Cortot.

Alternatively, we could have walked from metro Anvers (Line 2) and taken the funicular up to Sacre Coeur; or alighted at metro Pigalle and caught the little Montmartrobus to Saules-Cortot.

Whichever way you choose, a small street directory will help, as many of the locals are still not familiar with its location at no. 12 rue Cortot, just a few minutes from Place du Tertre. 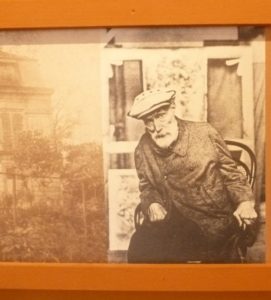 Open every day of the year, this delightful house museum celebrates the history of the neighbourhood, the personalities who lived and worked there, including Renoir, van Gogh and Picasso, and the cafes and cabarets they patronised and made famous.

The museum was inaugurated in 1960, and housed in the oldest extant building in the village.  You’ll find a fascinating collection of posters, paintings, drawings and documents illustrating the history of Montmartre, the artists’ ateliers and the cabarets.

It seems appropriate that the re-opening of the museum in late 2014 coincided with the 125th anniversary of Le Moulin Rouge.  This famous cabaret still features le Cancan in its productions, and is open 365 days a year.  Bookings are essential, as it plays twice nightly to 97% capacity audiences at each show.

The hill of Montmartre, at over 130 metres high, is the highest spot in Paris.  Its views of the city below had long been popular with artists such as the landscape painter Georges Michel, who captured the area’s rustic beauty around 1820 in The Mill of Montmartre.

Growing from a small rural village dotted with vineyards and windmills on the outskirts of the city, Montmartre was annexed to the 18th arrondissement of Paris in 1860.  Losing its rural characteristics and becoming more urbanised, its remote location offered inexpensive lodgings—the further up the steep hill, the cheaper the rent.  By the early 1880s it was attracting students, writers, musicians and artists such as Renoir, Toulouse-Lautrec, Van Gogh and later, Dali, Modigliani, Picasso and Raoul Dufy, looking for cheap studios, but also lured by the radical politics and liberal reputation of the neighbourhood.

These raucous venues featured the most avante-garde performers such as Aristide Bruant, and of course, the chorus girls performing the new, risqué dance, le Cancan, (meaning “tittle-tattle” or scandal) which became a sensation—a direct result of the relaxation of censorship laws in 1881.  The area became the symbol of Parisian decadence and titillation.

Audiences flocked to see the performances of artists such as Jane Avril and La Goulue, whose sexually suggestive routines were captured by Toulouse-Lautrec—the mostly male, bourgeois audience is easily identifiable by their ubiquitous top hats.  As well as his advertising posters, Lautrec depicted the artificiality and affectations of fin-de-siècle Parisian society, in paintings such as At the Moulin Rouge.

For many years, the house was the residence and studio of the artist Suzanne Valadon and her son Maurice Utrillo.  A number of rooms still have their original furnishings, while another shows clips from the Jean Renoir 1954 film French Cancan.

At the rear of the house is a lovely  garden, which has been replanted and named in memory of Renoir, who lived here between 1875 and 1877.  It was here that he painted a number of his best-loved works such as Le Bal du Moulin de la Galette, Jardin de la rue Cortot and La Balançoire—the swing itself is still there in the garden.

Just over the rear garden wall is one of the most unexpected sights of Paris: the vineyard, or Clos, Montmartre, owned by the Mairie de Paris.  This is the last remaining vineyard within the city limits and covers over 1,556 sq. metres where 1,900 vines grow 28 grape varieties, producing on average 1,700 bottles of wine a year.

The Fête des Vendanges takes place over 5 days in autumn to celebrate the grape harvest—the wine is fermented in the cellars of the Mairie.  The festivities include parades of musicians and dancers, wine tastings, culinary demonstrations, giant papier-mâché puppets, costumed and masked harlequins, culminating on the final evening with a fireworks display.

Guided tours of the vineyard take place during the Fête, but at other times visits must be arranged through the Montmartre Tourist Office at Place du Tertre.  The tour is free, but you pay for a tasting.