We recently discovered one of the gems of Paris that we had been meaning to visit for a very long time.  Off the tourist beaten track in the north east of Paris in the 19th arr., the Parc des Buttes-Chaumont is one of the largest outdoor spaces in the city. 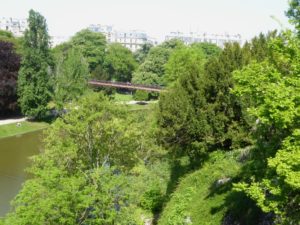 Covering around 25 hectares of hilly terrain, a large part of the park sits on a former gypsum and limestone quarry that was mined for the construction of buildings in both Paris and the USA.  In another part of the site, during the 13th – 17th centuries, the bodies of hanged criminals were displayed after their executions, while other areas became garbage dumps or sewage depositories! 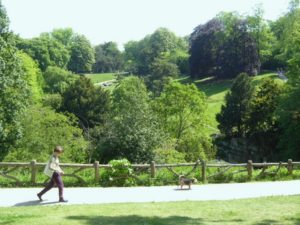 At the behest of Emperor Napoleon lll, this most unpromising site was chosen by Baron Haussmann for the location of a new public park for the recreation and relaxation of the rapidly growing 19th and 20th arrondissements of Paris, which had been annexed to the city in 1860.

It took over two years to clear and prepare the land for terracing and landscaping under the direction of engineer Jean-Charles Alphand, who had been responsible for the creation of the Bois de Boulogne at one end of the city, and the Bois de Vincennes at the other. The horticulturist for the project was Barillet-Deschamps, the chief gardener of Paris.

Thousands of workers remade the landscape and dug the large lake located in the centre of the park.  The recently invented dynamite was used to rearrange, or “sculpt”, the topography into picturesque hills, decorative arches, and a 32 metre high waterfall that cascades into a grotto, in the style of the Romantic English landscape gardens of the 18th century. 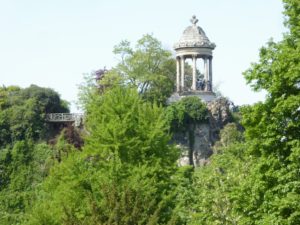 The great achievement though was a belvedere, rising 50m high that sits in the middle of the lake.  Gustave Eiffel designed a 63m long bridge eight metres above the lake to give access to it.  As well, there is a masonry bridge 22 metres above the lake which gave access to the belvedere from the other side of the park.  However, this bridge became known as the Pont des Suicides, and was fenced off after a number of well-publicised suicides!

The city’s chief architect, Jean-Pierre Gabriel Davioud, was commissioned to design a scaled down neo Classical rotunda for the summit of the belvedere, which he named the Temple de la Sibylle, taking as his model the Temple of Vesta at Tivoli near Rome.

It’s well worth climbing up the belvedere to experience the amazing view of the city from the summit.

He also indulged in further flights of fancy by building Swiss chalets, rustic cottages—now cafes and a restaurant—and picturesque gatehouses set in an idyllic landscape.

The park was finally opened on 01 April 1867 to coincide with the opening of the Paris Universal Exhibition, and became an instant hit with Parisians.  In the context of the park, reinforced concrete, in the guise of flower pots, was first unveiled to the world by the gardener Joseph Monier at the Exhibition.

Today, the park is renowned for its fine specimens of exotic trees and shrubs, including giant sequoias, Siberian elms, Gingko Biloba trees, cedars of Lebanon, Byzantine hazelnuts and many more indigenous and exotic species.  Many species that were planted in the 1860s are still there today.  This abundance of foliage and shading also encourages a multitude of bird species to nest and reproduce in relative safety.

The park is family friendly, with pony rides for the children, various exercise spaces for outdoor yoga and Tai Chi classes, stretch classes and the like.  However, the main drawcard is the huge amount of grassy areas perfect for relaxing and picnics, and well maintained pathways for quiet strolling and a few cyclists. 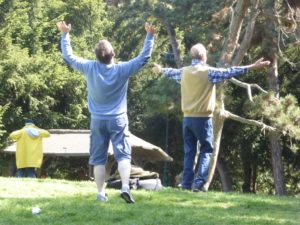 Next time you’re in Paris, and with some time to spare on a warm day, head out to this haven of peace and quiet to recharge your batteries ready for the next onslaught of serious sightseeing!

Getting there by metro:

Take Line 7 to Louis Blanc or Line 2 to Jaures and change onto a branch line 7B for Buttes-Chaumont.